I tried an expensive strings that have recently appeared on the market. They are Dogal’s Maestrale.

It is said that the blue treble strings are distinctive and sound good.

In conclusion, it was a unique string anyway. 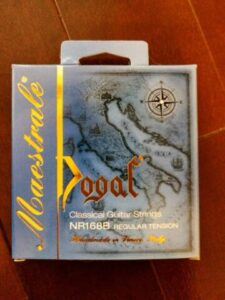 The price is about 3,000 yen. I think it is one of the most expensive strings in the market.

The packaging is also gold and has a solid box, giving it a high quality feel.

The name of the string, Maestrale, does not come from the word “maestro”, but from the wind that blows from the northeast of Italy. According to Wikipedia,

I thought for sure it came from Maestro. 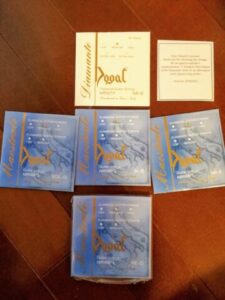 Here’s what’s inside. The three bass strings are packed together in a tight plastic package. It is safe to store for a long time.

If you look closely at the picture above, you’ll notice that there are four treble strings.

What’s this? I thought, and read the enclosed message.

It was written on it. I remembered that Pro-Arte composites came with both composite and nylon strings for the third string. It says “free” (complimentary), but to be honest, I’d like to see a discount on those strings since they are expensive.

Not as beautiful looking as I thought it would be, treble strings

But since we’re here, here’s how they look compared. 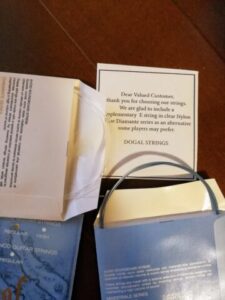 The lights are a bit reddish, but obviously they look different. Diamante (upper left) looks like a normal nylon string, but Maestrale is blue. It is not transparent blue, but opaque blue. It was said that the blue color represents the Italian wind and sky, so I thought it was a refreshing transparent blue. But it was actually non-trasparent blue…

I bought a set of Diamante strings separately, so I’ll review them there, but they are rather thin and flexible. I thought it would have a different feel because it’s nylon mixed with carbon, but it was normal. The Maestrale is so special that all the others look normal.

Also, the thickness of Maestrale is thicker and less supple. I don’t know what it is, but I can’t find the best way to describe it, but it feels like plastic of a plastic model. If I had to guess, I’d say it’s similar to the coffee-colored 3rd string of the Pro Arte composite.

This is what it looks like when all the strings are set. 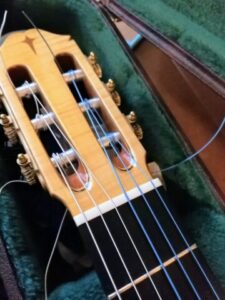 It’s so strange. It looks like a toy guitar or an electric or acoustic guitar (lol). If I may say so, I would have liked it to look a little more luxurious.

The bass strings, on the other hand, look normal. The following picture shows a comparison between a Pro-Arte Dynacore and a Dogal Diamante 6 string: 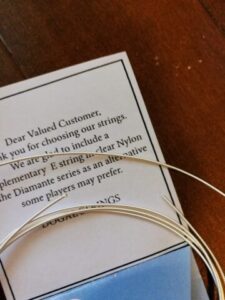 The strings look a little reddish, it’s a lighting issue. Both are a beautiful silver color.

The core wire is not blue, and it looks like a normal wound string. The thickness is also a little thick. It’s normal.

I mean, again, the impact of the treble strings is so great that everything else seems normal.

The first and second strings are very stretchable

When I put it up, it looks very odd as shown in the picture above.

I’m pretty sure I read in a review of a Japanese guitar magazine that it takes 3 or 4 days to stabilize, but if you’re close to the show, you should pay attention to when to replace strings.

It is the sound that is important, but the treble string sounds very loud as it is mentioned. It is not thin and sharp like carbon strings, but it sounds thick and loud.

In terms of sound character change, it’s hard to change as much as or more than carbon strings. They sound the same no matter how close or far they are from the fretboard.

The bass strings also sound good. This may depend on the guitar, but I’m impressed with how well the 6th string sounds. On a Savarez or Pro Arte, the 6th string is a bit quiet, but it sounds great. The sound of the guitar itself comes out loud, not a metallic crunch.

The tension feels a little strong. It may be because it’s thicker, and the treble strings is thick in particular. It says on the back of the package that it is easy on the guitar, but…. The impression may change when the strings become stable.

The one and only string, great when it fits.

My overall impression is that it’s just a unique string.

Especially for the treble strings, the material is completely different from others, and you will get a unique look and sound. If you like the sound, you won’t be able to use anything else.

The bass strings also sound great. This one doesn’t look or sound much different, but I’ve never experienced any other string that sounds this good.

Personally, I like the bass strings. The treble strings, well, I don’t mind them, but I’m not so sure I like them at the moment, considering their appearance and price. I think.

I’d like to add a note about the longevity of the strings as well, as my opinion may change as they stabilize.

PS: I changed to Diamante because I couldn’t stand the metallic sound of the first string.

I had no choice but to put on the first string of the diamante that came with the guitar.

I didn’t realize how much more relaxing it would look with just one string being a regular string.

The sound is not so loud as all-Maestrale case, but a calm sound. Surprisingly, I don’t feel uncomfortable, but it’s strange that the 2nd and 3rd strings are more loud than the 1st string.

The treble strings made of blue polymer are a feature of this set, but the strings are not very slippery and make an unpleasant squeaky sound when the left hand slurs or the flesh of the right hand slides over the strings.

I can’t find a good analogy, but I guess you could say it’s like sliding your finger over the smooth plastic of a brand new appliance.

It’s a bit of a bummer because it’s all noise and it’s slippery and hard to play.

I was hoping for a longer lifespan since they are expensive strings, but the lifespan was normal. After two weeks of playing one hour on weekdays and two hours on weekends, the bass strings lose their shine.

They sound loud and are interesting strings, but they are a bit expensive.

Which are the best-selling classical guitar strings? Find out which strings are the most popular from each store’s best-selling ranking.

Various manufacturers produce a variety of strings for classical guitar, but which ones are the best sellers? I researc...
2022.01.15

I strung up a Perla from Aquila, a manufacturer that makes some pretty unique strings. They are usually better strings ...
2022.02.18

These strings are made by Aquila, which has produced a number of distinctive strings. These strings, called Alchemia, u...
2022.02.20

The “Premium” series of Cantiga is now available. New materials are used in the winding to ensure long life.

The Savarez Cantiga is a bass string that is used by many professionals. A new product has just been introduced to t...
2022.01.15

There are many people who have been playing classical guitar for many years who are particular about their classical gu...
2022.01.15

This is the second review of strings from Aquila, a string manufacturer that goes its own way. This time it's the Zaffi...
2022.02.18

Professional classical guitarists weave a beautiful sound, but they must be using the ideal strings in addition to a go...
2022.01.15

When it comes to classical guitar strings in Japan, Figaro strings are probably the most popular, but Yamaha, a major m...
2022.01.15

When should I change my strings before a concert, recital or performance? Here are some tips on when to change strings for the best sound and most stable pitch.

In order to get the best sound at an important concert, recital, or performance, you want to play with new strings if p...
2022.01.15

I have introduced many strings in this blog, and I would like to summarize the recommended strings for different purpos...
2022.01.15

I have been playing classical guitar for 30 years. I like to experiment with different kinds of strings for my guitar and have tried about 70 different kinds of strings. I also use many guitar supports and accessories and review them as well. I also collect the latest information on classical guitars, useful information, and sale information that is not readily available in the world and introduce it in the form of a blog. Updates are also available on Twitter (@carlazarashi).

I have been playing classical guitar for 30 years. I like to experiment with different kinds of strings for my guitar and have tried about 70 different kinds of strings. I also use many guitar supports and accessories and review them as well. I also collect the latest information on classical guitars, useful information, and sale information that is not readily available in the world and introduce it in the form of a blog. Updates are also available on Twitter (@carlazarashi).